A little bit nutty (hey, who isn’t?!), a little bit spicy, a little bit chocolaty, Wattleseed is the unsung hero of native Australian foods, thanks to its high concentrations of potassium, calcium, iron and zinc. It’s also a protein powerhouse! Dried, roasted and crushed, Wattleseed can be used in baking, sauces, scones and scrambled eggs.

A staple in the diet of Indigenous Australians for thousands of years, Wattleseed was traditionally ground and used to make a type of flour. With a hard husk that protects the seed during long periods of dormancy on the ground, historically it was a rich source of protein and carbohydrate in times of drought. In the Central Desert, damper made from native seeds still forms an important part of the Aboriginal diet, though store-bought plain and self-raising flour are now frequently used instead. High in protein and fibre, Wattleseed also contains high concentrations of potassium, calcium, iron and zinc. In addition to numerous vitamins, it also has a low glycaemic index, which means it releases its sugars slowly and can be used by people with diabetes

Wattleseed has a strong nutty, roasted coffee aroma, with touches of sweet spice, raisins, chocolate and a hint of bitterness. It has a savoury wheat-biscuit flavour. 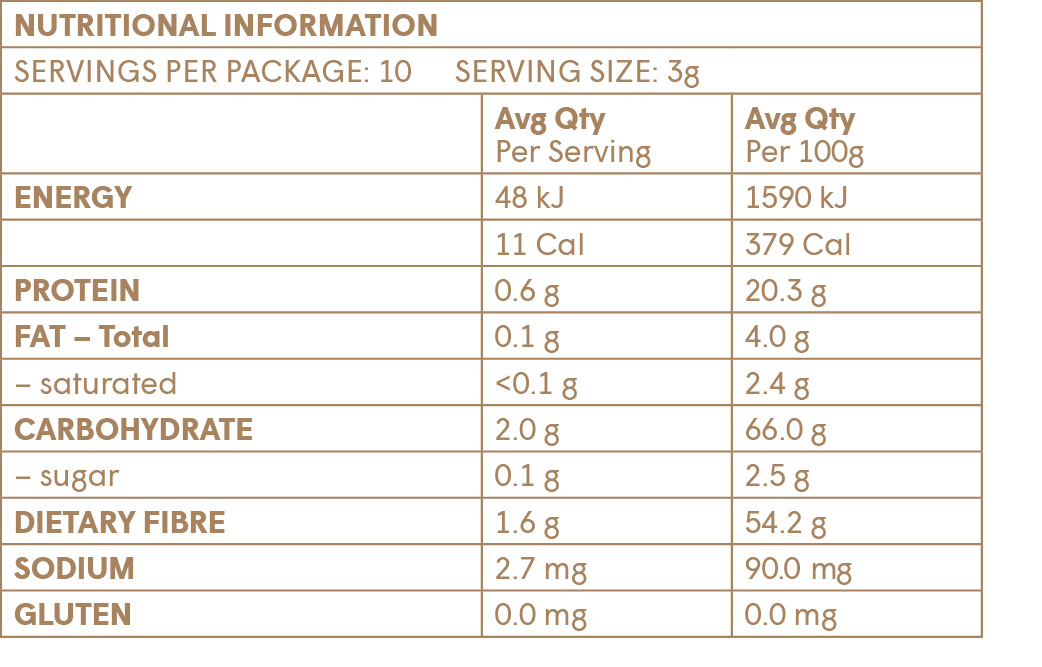 There’s a new group of superfood contenders. They come from an exotic and faraway land, where the weather is warm, the beaches are pristine and the forests are lush. This powerful group of fruits and seeds is so rich in vitamins, minerals and antioxidants, that it surpasses the past superfood master, the blueberry, and sets new global standards for nutrition and taste.

OK, truthfully, they are not so new. They have been growing in Australia for over 50,000 years, sustaining our Aboriginal people as sources of food and medicine. So we, as proud Australians, are thrilled to announce that after a mere few hundred years, we’ve finally caught on. The Australian Superfood Co celebrates native Australian produce in its creation of the Australian Bush Food Product Range. Discover the staggering nutritional powers, history and delectable flavours of our unique, nourishing range of ancient Australian Superfoods.

This product does not have any reviews yet

Quick view
Add to Cart
Australian Superfood Co Wattleseed Extract 50ml
AUD $19.95
Country of origin:   Australia         Alcohol content: 24% Alcohol by Volume Wattleseed was a mainstay of the diet of Indigenous Australians for much of...

We ship from Australia to most parts of the world.

Get the latest updates on new products and upcoming sales